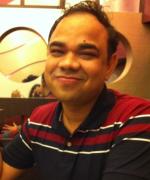 My publication details can be obtained from

String Theory is currently the most developed approach to quantum gravity and a promising framework for the unification  of fundamental interactions. Apart from moving towards the long term goal of delivering a unified theory of quantum gravity and other interactions, string theory research has led to the development of tools and techniques which throw new light on problems in field theory, condensed matter physics, classical gravitation and mathematics.

Black Holes provide an intriguing arena in which to explore the  challenges posed by the interplay of general relativity and quantum mechanics. One of the great successes of string theory has been the successful
explanation of Bekenstein-Hawking entropy formula (at least, for extremal and  near-extremal black holes) in terms of statistical degeneracy associated with different brane configurations in string theory have been working in the area of black holes in string theory for past few years. In the past, I have worked on understanding the properties of black holes using and developing the tools in string theory. Currently I am interested in holographic dualities, in particular, non-relativistic holography and microstate geometry program for black holes. In addition, various interesting problems in classical general relativity (especially higher dimensional GR) like horizon smoothness and singularity analysis continue to interest me.

Teaching is an integral part of academic experience.  I have taught electives like Quantum Field theory I, General Relativity and Cosmology as well as core courses like