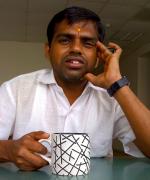 Research:
What I cannot create, I do not understand
- Richard Feynman

So is true for Life. For nearly a century, it was believed that Humans and its close relatives such as yeast and other eukaryotes were the sole owners of the Cytoskeleton, a mechanical framework that supports cells and carries almost all essential process within. However, recent discoveries have proved this to be a myth and shown us that the cytoskeleton was an innovation of our distant ancestors - 'Bacteria'. The bacterial cytoskeleton provides the most simplistic framework to understand the mechanical basis of all cellular process such as spatial organization and compartmentalization, cell shape establishment, cell movement, DNA segregation and cell division that are vital to the propogation of life. One of the most fascinating aspects of the cytoskeleton is their remarkable ability to self-organize and assemble into a great diversity of dynamic structures.

Broadly, our research interests lie in evolution of self-organisation, form and function in biological systems and in understanding the means by which bacterial pathogens have exploited this organization in pathogenesis for their survival and reproduction. In our research laboratory, we aim to understand how tiny cells such as bacteria achieve cellular organization and how the mechanical properties of their cytoskeleton allow them to perform the cellular functions.

We pursue these research interests through studying the following process in life:

Given the rapid increase in the rate of multi-drug resistance, there is a resurgence of the once conquered infectious diseases. There is an urgent need for a new class of antibiotics and bacterial cell division has proved to be an attractive target. Thus we are currently actively focused on regulation of cell division and spatial organization in bacteria. We also have an ongoing effort on creating “synthetic cytomotive proteins” for use in artificial cells.