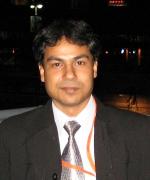 # Member - Post-Graduate-Committee for the School (PGCS)

The field of optics blended with modern material fabrication technologies has given rise to the field of Photonics.  This includes nano-photonics, quantum optics, bio-photonics, nonlinear optics etc. which has substantially extended the reach of optics to many other disciplines of Science and Technology. The invention of Laser by Theodore Maiman at Hughes Labs in the year 1960 followed by rapid progress in Laser Technology has provided a strong impetus to the field of Photonics. Today, Photonics is touching the human life from every possible direction and the applications range from Telecommunications to Medicine, from Military Warfare to Entertainment Industry.

We, at the School of Physical Sciences at NISER, are focusing on Nonlinear Photonics which mainly include generation of high-power radiations at wavelengths different from the conventional Laser sources and are tunable across a band of wavelengths or frequencies. The underlying physical processes include Second-Harmonic-Generation (SHG), Third-Harmonic-Generation (THG), Optical-Parametric-Generation/Oscillation (OPG/OPO), Four-Wave-Mixing (FWM) etc. in the bulk as well as waveguiding geometries. The field of Nano-Photonics and Plasmonics is another area where we are laying significant emphasis. We are theoretically and experimentally investigating the surface optical properties/surface states of periodic and aperiodic photonic lattices in order to ascertain topological phases in such systems. By carrying out such investigations, we aim to reduce the design as well as fabrication tolerances in modern-generation photonic/optical systems for applications in spectroscopy/sensing/communications. Our laboartory posses variety of fiber lasers which includes single-frequency, continuous-wave 40.0 W Yb-fiber laser and 20.0 W green fiber laser. Also, we have added high-pulse energy Yb-fiber laser (>30 microjoule) with ultrashort (< 300 femtosecond) pulse-width to be used for various nonlinear optical studies.