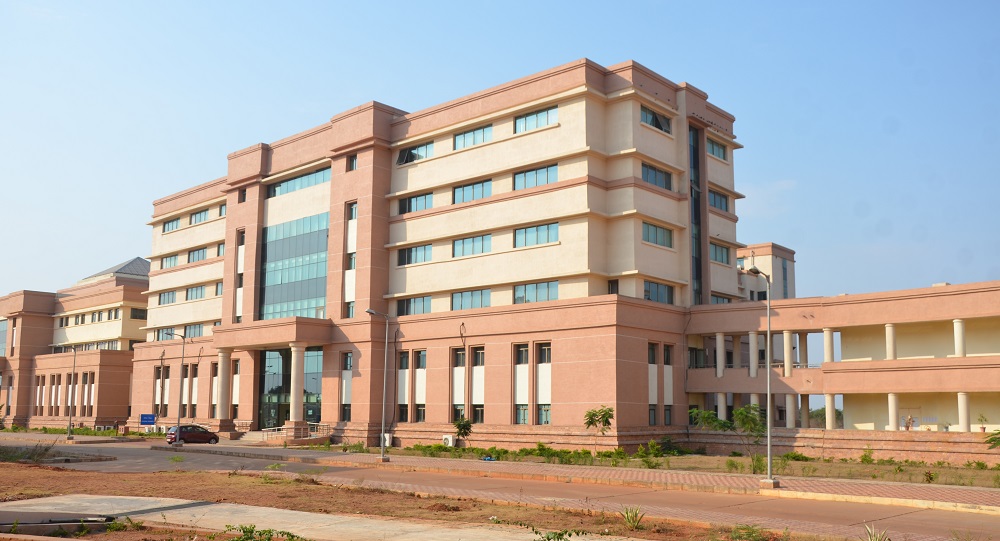 We offer 5-year integrated M.Sc. Program in Physical Sciences. Undergraduate students at NISER benefit from the excellent resources of a research institution dedicated to undergraduate teaching. NISER faculty have a flair for balancing their research activities with a dedication to teaching, through both classroom instruction and independent study advising.

Concentrating in physics at NISER will not only teach you about the structure of physical law, but it will allow you to take part in demonstrating them in the laboratories. Along the way you will learn to "think like a physicist" -- a hard-to-describe skill combining practiced intuition, the scientific method, and a knack for approximation -- and you will develop powerful, broadly-applicable problem-solving skills.

The Ph. D. program has two main goals: the development of a broad background in basic physics, and, through the completion of a thesis, the expansion of research abilities in a more specialized area.

Condensed Matter physicists study matter in its nearly unlimited variety of condensed states from liquids to crystalline solids, from thin films to fabricated nanostructures, from quantum Hall electron gases to superconductors, from carbon nanotubules to liquid crystals, and from amorphous structures to complex fluids. We seek both to clarify the fundamental issues behind the striking properties of these systems, and to illuminate their potential for useful application. Condensed matter physics underlies many key devices of information technology, including the transistor, the solid-state laser, optical fiber, magnetic storage media, and the liquid crystal display.

Much of the explosive growth in Condensed Matter Physics in the last decade has come at the mutual boundaries of physics, chemistry, and materials science. Recently in ever more dramatic ways, this intellectual cross-fertilization is producing key discoveries at the convergence of these fields and biology.

The school of physical sciences gruop at NISER has many faculties concentrating in differenet areas in Condensed matter Physics like Electronic structure calculation of atoms, molecules and solids, Superconductivity, Quantum phase transitions, Functional materials, nanomaterials and nanophotonics/Plasmonics, colloidal physics, and many other fields. There are currently 2 experimentalists and 4 theorists pursuing research in many areas of condensed matter physics. We expect to add more faculties in the near future.

The experimental high energy physics attempts to address some of the fundamental questions in the field of science, these includes:

String Theory is currently the most developed approach to quantum gravity and a promising framework for the unification of fundamental interactions. Apart from moving towards the long term goal of delivering a unified theory of quantum gravity and other interactions, string theory research has led to the development of tools and techniques which throw new light on problems in field theory, condensed matter physics, classical gravitation and mathematics.

Black Holes provide an intriguing arena in which to explore the challenges posed by the interplay of general relativity and quantum mechanics. As a theory of quantum gravity, string theory has led to new insights into the puzzles posed by black holes and tremendous progress has been achieved in past ten years in exploring black holes in string theory, beyond the initial successes of 1990's. Even after so much progress, black holes continue to be an active area and source of new problems and insights.

The string theory group at NISER (with two current members) has been actively involved in black hole research for quite sometime and has made numerous contributions to this exciting area. Special area of interest are issues related to black holes, especially involving precision tests of macroscopic and microscopic aspects of black holes.=

The coherent collective excitation of an atomic ensemble to the highly excited Rydberg states has become a feasible mechanism for quantum information processing and also opens up the possibility to study the strongly correlated systems. The underlying physics of this coherent collective excitation of atoms to the Rydberg state is interesting due to the strong interacting nature of the Rydberg atoms. In a large ensemble of atoms, the first excited Rydberg atom shifts the resonance of their non-excited neighboring atoms and prevents their excitation with a narrow bandwidth laser. The phenomenon is called blockade. This single excitation to the Rydberg state is shared by all the atoms present in the blockade volume and hence, generate a mesoscopic entangled state. In the recent past, Rydberg blockade has been demonstrated in an ensemble of cold atoms in a magneto-optical trap, Bose-Einstein condensate (BEC) and also for single atoms.

The nonlinear optics group at NISER is working the area of second harmonic generators and optical parametric oscillators (OPOs) that provide an alternative and practical route to reach those spectral regions that are inaccessible to conventional laser technology, by exploiting nonlinear optical properties of non-centro-symmetric crystals. An interesting configuration of OPOs is singly-resonant OPOs or SROs where only one of the generated waves oscillates between a pair of mirrors forming a very stable source of generating coherent radiation. The frequency tunability is achieved by either changing the properties of the crystal such as temperature or angular orientation with respect to the pump beam, or by inserting a frequency selective element in the cavity such as an etalon which manipulates the longitudinal resonance condition. In the present research work, the main idea is to generate high-power, continuous-wave, coherent radiation extending from ultra-violet to mid-infrared. This wavelength region is extremely crucial for carrying out absorption spectroscopy of trace-gas molecules such as methane, formaldehyde, nitrogen, carbon-dioxide and studying the atomic transitions.

The group is also working on studies of modal interaction between bandgap-guided modes in a dielectric medium and surface plasmon modes. The dispersive properties of the waveguides, anti-crossing behavior and propagation loss features are being investigated in detail. Another interesting feature that involves the existence and excitation of 'Tamm-plasmon' states is also being investigated. The major goal of this research activity is to provide alternative as well as efficient route for signal processing in the miniaturized photonic integrated circuits and realization of efficient biochemical sensors.

To harness the advantage of quantum mechanics one has to build quantum devices. A novel way of creating such devices is via graphene. Electron transport in graphene can be very easily controlled by means of a gate voltage alone, unlike normal semiconductors. Utilizing these properties of graphene to manufacture a quantum bit, was the purpose of our research. To do this we marry electron transport in graphene with Josephson physics (The ability of a super-current, current flow without dissipation, to exist at equilibrium between two superconductors separated by an insulator). This entails constructing a graphene ring with two superconducting segments. Thus one has two Josephson junctions. These junctions can be tuned by the application of a gate voltage alone to different energies. Superpositions between these two energy levels will form the qubit. In addition, in a generic quantum system non-local effects are quite obvious. In this context dephasing processes can lead to vanishing non-local or quantum effects because of the emergence of the classical. However in quantum dot attached to ferromagnetic leads when one operates it as a pure spin pump one counter-intuitively observes the opposite, dephasing processes which lead to the emergence of non-local effects.

Another area related to Quantum simulations on which we work is related to the understanding Photosynthesis. Which has hitherto been done using chemical processes which dont have much to do with the wavenature of particles. Recently in a dramatic twist excitions which carry information related to photosynthetic processes were revealed to show quantum beats. How do we understand the wave nature at such high temperatures. Clearly, a best possible way would be to simulate another quantum system which behaves exactly similar to the photosynthetic mechanism and see how it changes as room temperature effects are brought forth.

Major focus of research activities under this section is the fundamental studies of electronic transport in Josephson Junctions using both low TC and high TC superconducting electrodes in combination with a variety of non-magnetic and magnetic barriers. The recent surge of interest in this field of research is primarily due to the prospects of superconducting qubits (in which Josephson junctions are the building blocks) in a practical realization of solid state quantum computation. The biggest advantage of superconducting devices over other solid state approaches is the presence of quantum coherence on a macroscopic scale. Here at NISER we intend to address the fabrication issues of micron and sub-micron scale Josephson devices using UV, e-beam and focused ion beam lithography and study the low temperature electrical transport properties. The physics question we intend to address include

The major challenge in the field of photonics is to achieve the complete control of light manipulation. In this regard the low dimensional arrays of nano-particles or nano-clusters are most suitable. In an array of nano-particles (hole or anti-hole array) the field intensity of output light enhanced few orders of magnitudes as compared to the input. This termed as extraordinary transmission (EOT), which is a new pathway for Plasmon based nanoscience. So nano-plasmonics can be thought of as a 'second youth' of plasmonics to solve this problem by integrating lithography, microscopy, and spectroscopy, to realize the interaction at such low dimensions in the range of 5-100 nm.
The first attempt of Nanofabrication and Photonics group at NISER is to fabricate the nanostructures using various lithographic techniques, thin film deposition techniques, and embedded nanostructures using energetic low and swift heavy ion beam implantation and study the strong interaction of light with nano structured materials, which lead to the design of plasmonic devices with optimized properties. The physics question along with its application, we intend to address include

Statistical mechanics tries to explain the behaviour of macroscopic systems by studying the statistical properties of their microscopic constituents. It is not only a major tool in condensed matter physics, but has also found applications in other areas like biology, economics and computer science.