Purna Chandra Das : A Prosaic Ode to his Exceptional Life 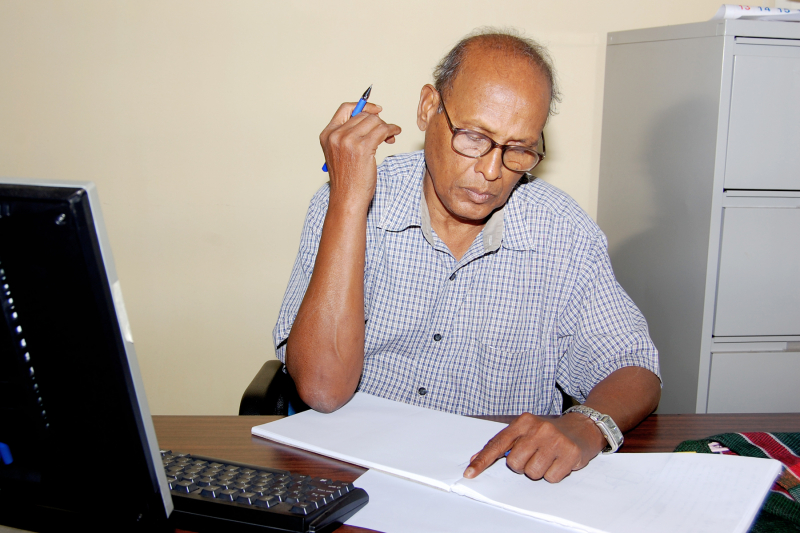 The author of this article is Mr Debanshu Ratha, former Integrated MSc (Mathematics) student of NISER.

Prof. Purna Chandra Das was fondly remembered among us students as PC Das sir. A very simple and straight human being, as transparent as it can get. His life put in perspective is an inspiring one, and sends a message to everyone who feels low or down due to circumstances to rise above one’s hardships. From a humble beginning in rural Odisha to becoming a household name as a mathematical genius is no fairy tale. Just hard work, perseverance and discipline. That was his mantra, which he shared with his students time and again. His thirst for learning continued late into his ripe old age, even being an embodiment of knowledge, arrogance never clouded his vision. His thirst for knowledge continued, he kept reading, listening to talks, asking questions never stopped even in student seminars.

PC Das sir completed his PhD from Lomonosov Moscow State University in 1966 with Dr. Lev D Elsgolc as supervisor. Dr. Elsgolc has a very famous book in Calculus of Variations, standard reference across curricula all over the world. Lomonosov Moscow State University then was one of the leading universities of the world, today’s league of MIT, Stanford and Harvard. Even after so many years it still enjoys the top 100 status in the world. When Das sir went there he was not into a PhD in Mathematics, but for a different program but his extraordinary mathematical abilities were recognized by his teachers there, who persuaded him to transfer to Mathematics.

But the graduate studies took off at a level which Das sir was not prepared for, given the syllabus he had covered in India prior to going there. He asked for sometime, a couple of months in which he completed the 2 volumes of Methods of Mathematical Physics by Richard Courant! After completing this series one is definitely at an advanced graduate level anywhere in the world. This speaks of his commitment towards his work.

Also during this time food shortage was rampant in Russia. Luckily a good Samaritan came forward to help this young graduate student by providing food and shelter, when he asked for help. But it was a hard time so expenditures had to be severely cut and he had to manage with whatever was provided to him for food.

Many people may not be aware, but after having earned his PhD and having returned to India, Prof. Das was offered a position at the famed Indian Statistical Institute, Kolkata after a brief meeting/interview at hotel by the very Dr. Prasanta Chandra Mahalanobis. But Prof. Das had already made a commitment to join REC Rourkela now NIT Rourkela.

After a brief stint there he joined Department of Mathematics in IIT Kanpur where he was involved in active pedagogy for more than 35 years and produced many bright PhD students like N. Parhi and Amiya Pani etc. Amiya Pani is now a distinguished mathematician and professor at IIT Bombay. Prof. Das was for a brief period NBHM chair professor at the Institute of Mathematics and Applications, Government of Odisha. After which he joined NISER, Bhubaneswar still in its nascent stage, as a visiting faculty guiding and building the mathematics department there.

This is where we students at NISER came in contact with him. We were the 2nd Integrated M.Sc batch at NISER, and though he stayed through our journey for 4 years out of 5 we could never have enough of him. He taught us Linear Algebra, Real Analysis in the first year and a course on Nonlinear Analysis later in advanced M.Sc stage. We really enjoyed his lectures and wished he took more courses for us. He dressed simply as well, he always arrived in formal half-shirt tucked in, with chapals for the feet, and a metallic watch worn slightly above the wrist. And no accompanying notes or slides, just doing everything ab initio spontaneously using chalk and blackboard.

Every time it was a magical performance, even the most complex things were pieced bit by bit in a fairly understandable manner. His explanations had impeccable clarity. He would pause in between and ask the students, the weakest first, if they grasped the concept. Then cross questioned them. Don’t bother if you answer wrong in his class, he has the patience of an elephant. He will redo everything calmly until the last person in the class has understood. We never rushed during the course, but the syllabus was always completed in time. There was a particular trait of his during his lectures. He never started immediately after coming to the class. He always began with wiping the board completely clean, through the five minutes. It gave us some time to breathe, relax and reset for the lecture to begin. Isn’t it what they teach in meditation ? After the lecture was over he also took the responsibility to wipe the board clean again, a pleasant gesture towards the incoming lecturer. How we loved him for everything !

He had a very excellent tip from his own personal approach to share with students who were beginning in research. Once we asked him, “How to read and understand research ?”. Here is what he shares with us. One should begin by reading the title first. Then try to comprehend, what the paper/article might contain. Then read the abstract. Did you get it right ? Good guess, now you are one with the author when he formed the structure of the paper in his mind. No, you did not get it right ? Don’t worry you are learning something new. Check if your guess has been carried out in research, if not congratulations you have formed your research problem.

Now read the abstract again. Try to work out the steps on your own if you can do it yourself. If you can, you have understood the paper before having gone through it. A quick glance through it and you are done with the paper. By the way if your method of arriving at the result is different, congratulations you just have an alternative approach to the research problem. Write it well and you can have a publication. If you cannot work beginning to end, you have some knowledge gaps to take care, some development or trick you are missing. Read carefully through the paper. In the end you have widened your horizon of knowledge. Wasn’t that just awesome and inspiring ?

Outside classroom he was always friendly and supportive. And we always took his advice whenever we faced problems. He was the first person we had approached to set up the MathematiX club at NISER, for student seminar activities. And he happily agreed, and gave the go ahead. He looked upon us as his grandchildren.

He was an academician to the core. Once he invited all of us to his house, which is a beautiful one in the heart of Bhubaneswar city. He wanted to spend sometime out with us. Another idea was to inspire us to join academics, after our Masters degree. He showed us his house which he built according to his choice, talked about where his children are, what they are doing and hosted us with good food. The take home point was that one can earn an honest living in academics also to retire happy and satisfied.

We all are indebted to him for that. Surely in the beginning academics does look a tough road to take, but with encouraging teachers like him you will regret if the road is not taken.

A truly inspirational teacher, researcher and individual, may his soul rest in peace. Amen!

(Based on our experiences and conversations with him, the historical facts stated in here may be taken with a pinch of salt.)